Geneva, Switzerland, Monday, 5 November 2018 – Now in its 10th year, the DP World Tour Championship, Dubai will be contested by the top 60 players on the European Tour’s Race to Dubai Rankings Presented by Rolex on 15 – 18 November 2018 at Jumeirah Golf Estates. 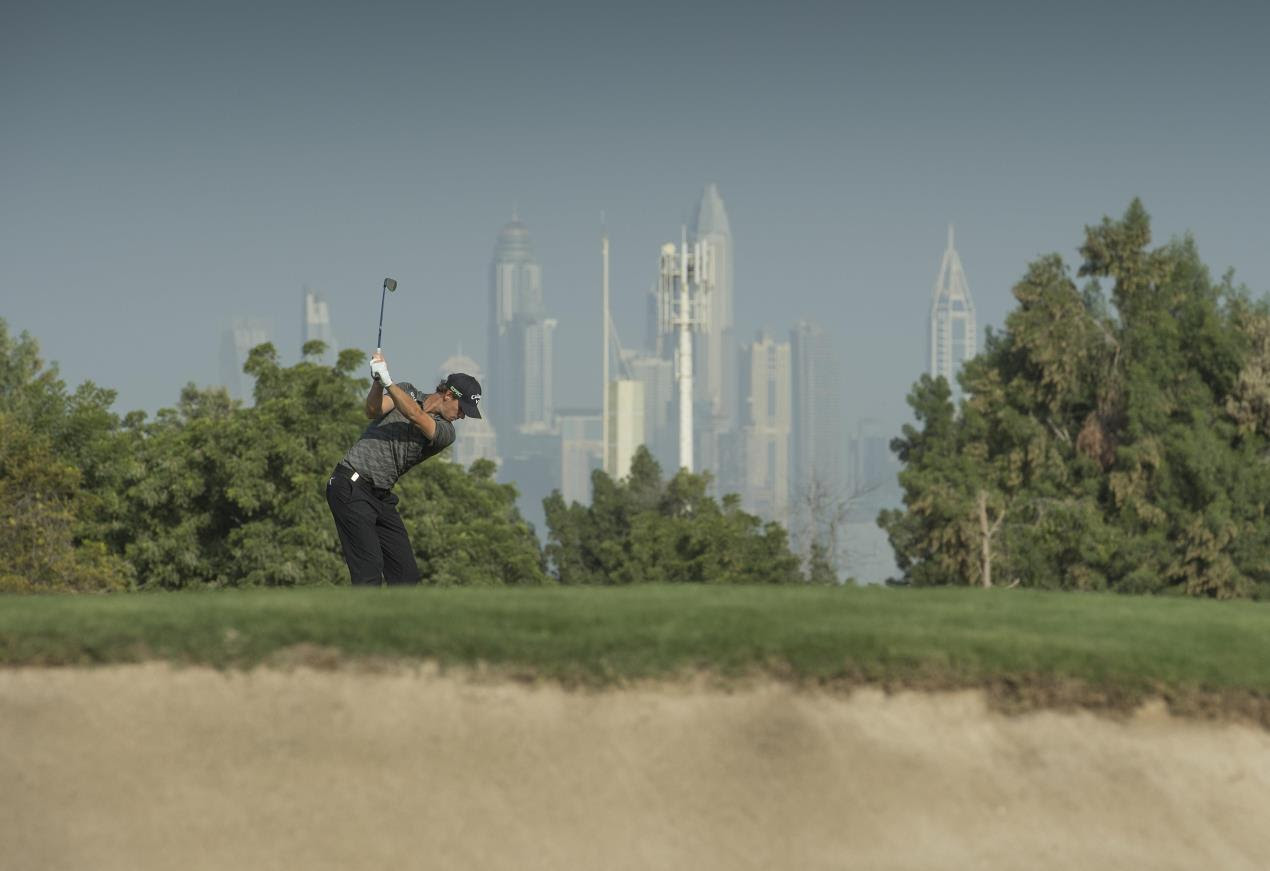 Set against the backdrop of Dubai’s glittering city skyline, the tournament marks the final Rolex Series event of 2018. Launched in 2017, the Rolex Series presents a global programme of golfing showpieces on the European Tour, which Rolex has partnered since 1997.
The elite field is set to include many of the stars from the victorious 2018 European Ryder Cup Team, including Testimonees Thorbjørn Olesen and Jon Rahm, who will be defending his 2017 title. 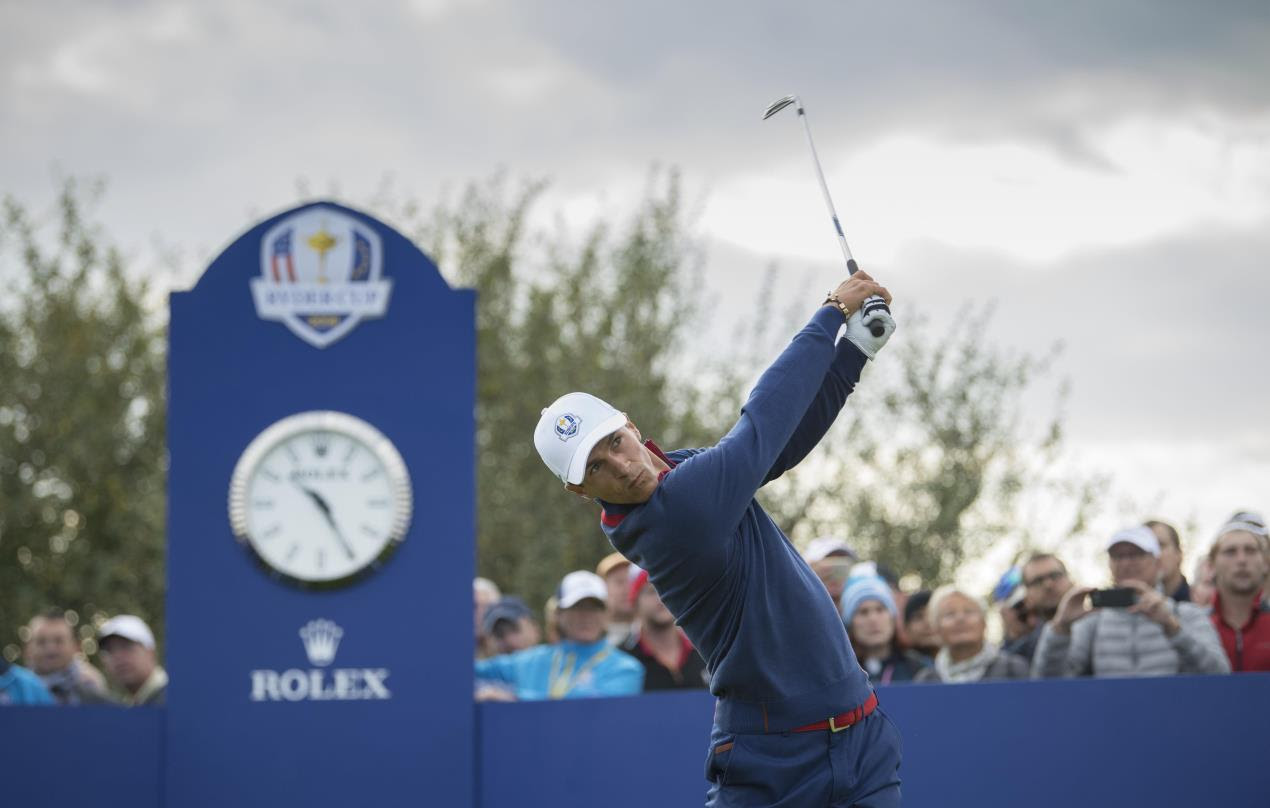 For 28-year-old Olesen, victory on Jumeirah’s Earth Course would make for the Dane’s second Rolex Series win in the same calendar year, after winning the Italian Open in June. In doing so, he would follow in the footsteps of 24-year-old Rahm, who won the 2017 Irish Open ahead of being crowned the winner in Dubai.
The Spaniard said: “I’m excited to return to Dubai and defend my title. It will be all the more special to do so alongside teammates from The Ryder Cup, which was an unbelievable experience for me.” 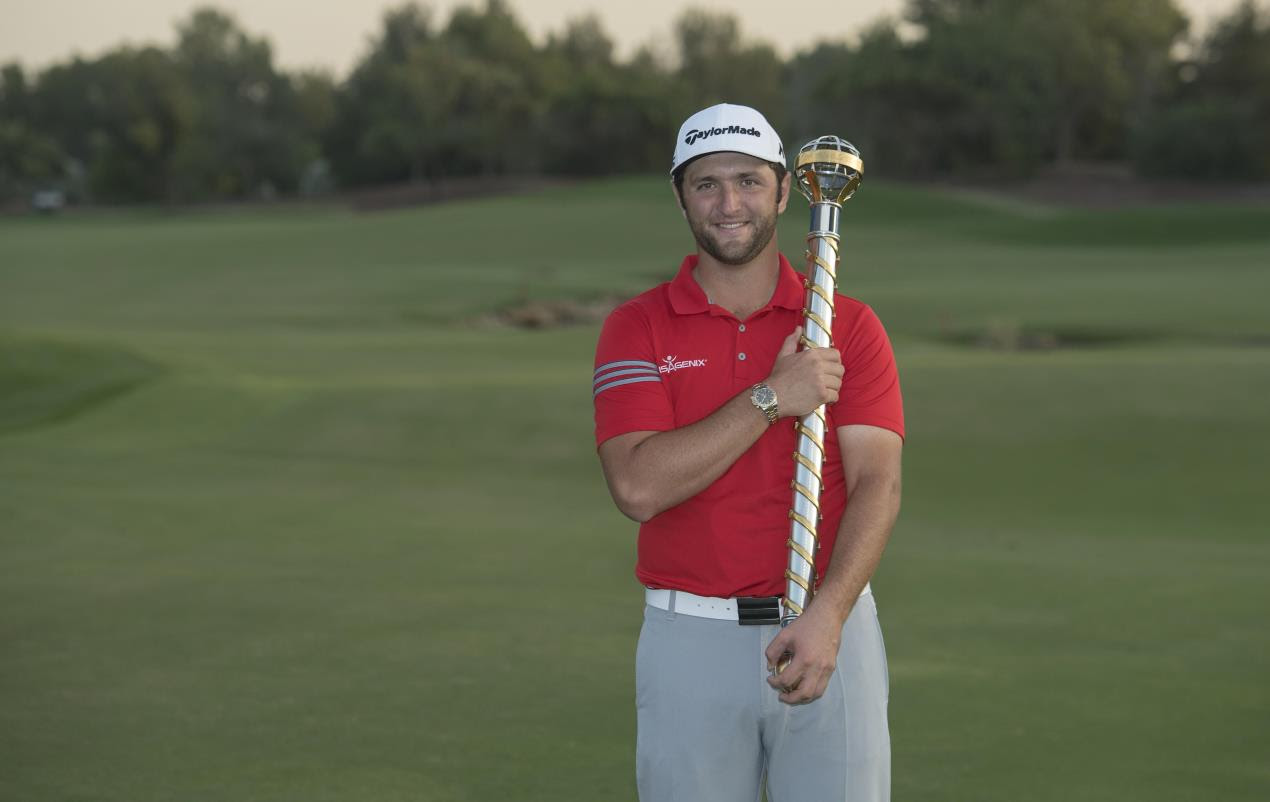 Fellow players from the Rolex golf family contending the DP World Tour Championship include Rahm’s compatriot Rafa Cabrera Bello, who is also a previous Rolex Series winner; Belgians Thomas Pieters, a three-time European Tour winner, and Thomas Detry; 2016 DP World Tour Champion Matthew Fitzpatrick, from England; and Haotong Li, from China, who won his second European Tour event early this year in Dubai.
RACE TO DUBAI
Established in 2009, the season-long Race to Dubai concludes at the DP World Tour Championship, with the leader of the Race to Dubai Rankings Presented by Rolex crowned alongside the tournament winner, to wrap up a season comprising 47 tournaments spanning 30 countries.
ENDS

ROLEX TESTIMONEES CONTESTING THE 2018 DP WORLD TOUR CHAMPIONSHIP, DUBAI
Rafa Cabrera Bello
Thomas Detry
Matthew Fitzpatrick
Haotong Li
Thomas Pieters
Thorbjørn Olesen
Jon Rahm
ROLEX TESTIMONEES THAT HAVE WON THE DP WORLD TOUR CHAMPIONSHIP, DUBAI
Matthew Fitzpatrick (2016)
Jon Rahm (2017)
ROLEX TESTIMONEES THAT HAVE WON THE RACE TO DUBAI
Martin Kaymer (2010)
Luke Donald (2011)
ABOUT THE ROLEX SERIES
Through an unwavering commitment to the game of golf for more than 50 years, Rolex has developed one of the broadest and most enduring relationships between brand and sport, in the world.
Rolex has always contributed to the further development of golf worldwide through its partnerships with guardians of the global game – organizations with the responsibility of advancing the sport, such as the European Tour.
Coinciding with the 20th anniversary of this partnership, in 2017, the Rolex Series was launched as the premium tournament category on the European Tour’s International Schedule. Presently comprising eight tournaments staged in a variety of golfing locations around the world, Rolex Series events offer a minimum prize fund of US$7 million.
The 2018 roster of Rolex Series tournaments include: the BMW PGA Championship (May 24-27); the Italian Open (May 31-June 3); the HNA Open de France (June 28-July 1); the Dubai Duty Free Irish Open hosted by the Rory Foundation (July 5-8); the Aberdeen Standard Investments Scottish Open (July 12-15); the Turkish Airlines Open (November 1-4); the Nedbank Golf Challenge hosted by Gary Player (November 8-11); and the season-ending DP World Tour Championship, Dubai (November 15-18), where the leading golfer of the Race to Dubai Rankings presented by Rolex will be crowned.
ABOUT ROLEX
An unrivalled reputation for quality and expertise
Rolex, a Swiss watch manufacture headquartered in Geneva, is recognized the world over for its expertise and the quality of its products. Its Oyster and Cellini watches, all certified as Superlative Chronometers for their precision, performance and reliability, are symbols of excellence, elegance and prestige. Founded by Hans Wilsdorf in 1905, the brand pioneered the development of the wristwatch and is at the origin of numerous major watchmaking innovations, such as the Oyster, the first waterproof wristwatch, launched in 1926, and the Perpetual rotor self-winding mechanism invented in 1931. Rolex has registered over 400 patents in the course of its history. A truly integrated and independent manufacturing company, Rolex designs, develops and produces in-house all the essential components of its watches, from the casting of the gold alloys to the machining, crafting, assembly and finishing of the movement, case, dial and bracelet. Through philanthropic programmes and a broad palette of sponsorship activities, Rolex is also actively involved in supporting the arts, sports and exploration, and encourages the spirit of enterprise, as well as the conservation of natural environments.

Geneva, Switzerland, Tuesday, 7 November 2017 – From 16 – 19 November the Jumeirah Golf Estates in Dubai will host the final tournament of the Rolex Series, the DP World Tour Championship, Dubai. The European Tour’s top golfers will be vying to crown their season as champion and, for those leading the Race to Dubai Rankings Presented by Rolex, win the coveted Race to Dubai title.

First held in 2009 and becoming part of the innovative Rolex Series in 2017, the DP World Tour Championship is the season finale of the European Tour, of which Rolex has been a partner since 1997. Over this 20-year partnership, Rolex has cemented its place at the heart of the game in Europe, and the introduction of the Rolex Series offers players the chance to compete in a new premium tournament category on the European Tour’s International Schedule.

Played on the world-renowned Earth Course at Jumeirah Golf Estates, the DP World Tour Championship is a challenging tournament, befitting the season finale. The Earth Course’s sparkling white bunkers and deep green fairways are inspired by the best courses in Europe, providing the perfect setting to crown the season’s best golfer.

Defending champion and Rolex Testimonee Matthew Fitzpatrick said: “I’m looking forward to returning to Dubai to defend my title. This year Rolex celebrates its 50th anniversary supporting golf, and it’s a privilege for me to be a part of the Rolex family and experience that support first hand. The Rolex Series highlights Rolex’s continued commitment to our game and has been an exceptional addition to the season, enabling both European Tour players and fans to enjoy an elevated level of golf, closer to home.”

RACE TO DUBAI
Founded in 2009, and now spanning 47 tournaments in 26 countries, the Race to Dubai is a season-long competition for European Tour golfers that demands sustained quality and excellence throughout the year. On completion of the DP World Tour Championship the leader of the Race to Dubai Rankings presented by Rolex will be crowned the 2017 winner.

Rolex Testimonee Jon Rahm, ranked number five in the Official World Golf Rankings and already a Rolex Series winner, is a strong contender to win the Race to Dubai. At number four in the Race to Dubai Rankings presented by Rolex, a strong finish for the Spaniard at the DP World Tour Championship could see him join fellow Testimonees Martin Kaymer and Luke Donald as winners of the prestigious Race to Dubai.

ROLEX NEW GUARD
Joining the 23-year-old Fitzpatrick and 22-year-old Rahm in Dubai will be a number of remarkably talented young golfers and fellow Testimonees who belong to the Rolex New Guard. Like their iconic predecessors Arnold Palmer, Jack Nicklaus and Gary Player, also known as ‘The Big Three’, these young players are eager to leave their mark on the sport, ushering in a new generation at the top of the men’s game. Among them are Haotong Li, Thorbjørn Olesen and Thomas Pieters and who have eight European Tour wins between them. Fellow Testimonees competing in Dubai include two-time Major champion Martin Kaymer, and two-time European Tour winner Nicolas Colsaerts.

ABOUT THE ROLEX SERIES
Commencing in 2017, the Rolex Series is the premium tournament category on the European Tour’s International Schedule. Presently comprising eight tournaments, staged in a variety of golfing locations around the world, Rolex Series events will offer a minimum prize fund of US$7 million.

ABOUT ROLEX
Rolex, the Swiss watch brand headquartered in Geneva, enjoys an unrivalled reputation for quality and expertise the world over. Its Oyster and Cellini watches, all certified as Superlative Chronometers for their precision, performance and reliability, are symbols of excellence, elegance and prestige. Founded by Hans Wilsdorf in 1905, the brand pioneered the development of the wristwatch and is at the origin of numerous major watchmaking innovations, such as the Oyster, the first waterproof wristwatch, launched in 1926, and the Perpetual rotor self-winding mechanism invented in 1931. Rolex has registered over 400 patents in the course of its history. A truly integrated and independent manufacturing company, Rolex designs, develops and produces in-house all the essential components of its watches, from the casting of the gold alloys to the machining, crafting, assembly and finishing of the movement, case, dial and bracelet. Rolex is also actively involved in supporting the arts, sports, exploration, the spirit of enterprise, and the environment through a broad palette of sponsoring activities, as well as philanthropic programmes.

The Qualifying School will reach its climax at PGA Catalunya Resort for the eighth successive season when the Girona-based venue, a European Tour Destination, holds the Final Stage from November 14-19, 2015.

PGA Catalunya Resort’s Stadium and Tour courses – co-designed by Neil Coles and Angel Gallardo – will again host the six-round finale of the Qualifying School, which gets underway with the First Stage Section A on September 15.

The award-winning resort first held the Final Stage in 2008 and will continue to play host until at least 2017, having recently extended its existing deal by three years.

Notable graduates from the 2014 Qualifying School include Indian Anirban Lahiri, who has gone on to capture two European Tour titles since claiming the 17th card at the Final Stage last November; and England’s Matt Fitzpatrick, currently inside the top 40 in The Race to Dubai thanks chiefly to three top five finishes so far this season.

Julio Delgado, Chief Executive Officer of PGA Catalunya Resort, said: “We feel privileged to host such an accomplished group of players year after year, and strive each time to offer them the best conditions possible so they can focus on what is sure to be a long and stressful week.
“We have continued to fine-tune the Stadium Course, making sure it is always tournament-ready, with fast greens and challenging rough that will provide a great test of golf. David Bataller, our head greenkeeper, has also worked on emphasising the natural contours of the course to accentuate its ‘stadium’ feel, which will undoubtedly add to the atmosphere of the week.”
Mike Stewart, The European Tour’s Qualifying School Director, said: “PGA Catalunya Resort has been a permanent fixture as the venue for the Final Stage of the Qualifying School since 2008, and the decision to extend the agreement to 2017 and hopefully beyond shows how delighted we are with the facilities on offer at the resort.

“With its two magnificent courses, first-class practice facilities and adjoining hotel, I can think of no better venue for our Final Stage; and it is telling that, despite the stressful and intense nature of the week, the players are always extremely complimentary of the venue.

“We are already looking forward to returning to the resort in November and working alongside Julio and his team, who always go out of their way to ensure our visit is a warm one.”

As well as being crowned the 2015 European Golf Resort of the Year by the International Association of Golf Tour Operators (IAGTO), PGA Catalunya Resort was also voted Spain’s Best Course in the inaugural World Golf Awards.

The awards were among the latest in a series of high-profile accolades for the resort, which include being voted Spain’s number one golf course by Top100GolfCourses.co.uk (2012-2015), the Best Golf Development in Europe (2013-2014) at the European Property Awards, and being listed among the World’s Top 100 Golf Courses by one of the UK’s leading golf magazine, Golf World.