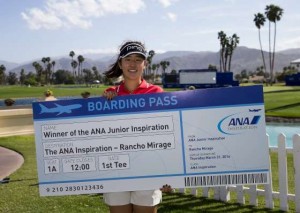 Lee claimed the final place in a field of 115 at this week’s ANA Inspiration after carding an impressive 5-under par, 67, to win the expanded ANA Junior Inspiration by a sizeable 3 shots. Lee will now tee off alongside the best women’s golfers in the world when the tournament begins this Thursday, March 31 in Rancho Mirage.

Describing her sweet victory, winner Andrea Lee said: “As a golfer this has to be one of the best days of my life. I’m just really excited and looking forward to playing in the ANA Inspiration. I have to thank my playing mentor today and legend Pat Bradley. She was kept me calm and taught me to be patient out there, but also kept my confidence high. As I look forward to the ANA Inspiration I’m going to remember every word she said. It worked for me today so hopefully it can throughout the rest of this week. I’ll try to build on the experience I gained last year and give it my best shot.”

After failing to make the cut last year at the ANA Inspiration as an invited amateur, the young star showed outstanding resilience today on her return to Mission Hills Country Club. This time competing on the Palmer Course and against an expanded field of elite juniors, Lee successfully booked her place in the starting field and earned the right to enjoy another golfing experience of a lifetime.

For the first time in the history of the newly-named ANA Junior Inspiration, the field included eight special invitees from across North America. Each of these junior players represented one of All Nippon Airway’s (ANA) gateway cities in North America – Chicago, Honolulu, Los Angeles, Seattle, San Francisco, San Jose, Vancouver, Washington D.C. Historically, the ANA Junior Inspiration consisted of the best young golfers from California, but with the support of ANA, the opportunity to vie for a spot in the LPGA’s most iconic major championship was extended to additional deserving junior golf hopefuls.

“We are thrilled to welcome Andrea to the 2016 ANA Inspiration field,” said Hideki Kunugi, Senior Vice President of the Americas, ANA. “Her performance today amongst a stellar field was inspiring and we wish her the best of luck this week as she continues on her journey of competing at the highest level in golf. It was great to see new faces in the expanded ANA Junior Inspiration field today and we look forward to including more top junior talent from across North America in the future.”

Each group of junior players competing in the ANA Junior Inspiration today was paired with a former ANA Inspiration champion for coaching and mentoring throughout the event. LPGA Hall of Fame legend Pat Bradley had the chance to work closely Lee on the practice range and during Monday’s round providing valuable guidance and inspiration to the next generation of golf stars.

Former champion Bradley, who won the tournament in 1986, turned the clock back 30 years at the scene of her memorable victory to successfully mentor and guide eventual winner Lee around the Palmer Course.

Speaking on her junior’s win, Bradley said: “Wow. I’m so thrilled for Andrea. She’s worked so hard for this and it’s great she has won the right to be in the ANA Inspiration. I’m sure the win feels even sweeter with some of the best juniors invited to play by ANA. It’s a wonderful chance for careers to really take off and reach new heights!”

“I know the past champions are meant to offer advice and ‘inspire’ the junior, but honestly, I’m inspired by this experience, humbled and honored. The standard is so high now and all the juniors hit it so beautifully. I’ll be watching Andrea’s progress through the opening rounds and hopefully she can make it to the weekend and enjoy every moment. ”

Lee’s journey to the ANA Inspiration is just beginning as she has also been invited by ANA to attend the Champions Dinner taking place this evening and the pro-am on Wednesday, March 30. On Thursday, she will tee it up with the best players on the LPGA tour to compete for the title of 2016 ANA Inspiration champion.

ANA, Japan’s leading airline, announced its partnership with the LPGA in 2014 to become both the title sponsor of the first major of the season and the Official Airline of the LPGA. “Inspired Journeys” serves as the spirit of the tournament and ANA looks forward to again reaching a global audience with the ANA Inspiration while maintaining the long-standing traditions of the championship.

For more information about the ANA Inspiration, visit www.anainspiration.com.

About the ANA Inspiration

The ANA Inspiration is golf’s first major and one of the LPGA Tour’s most prestigious events. Previously known as the Kraft Nabisco Championship, the tournament was founded in 1972 by David Foster and Dinah Shore and earned the designation as a major championship in 1983. Contested at Mission Hills Country Club in Rancho Mirage, Calif., since its inception, the ANA Inspiration holds the distinction of being the second oldest golf tournament continuously held at the same course. For many, the event is most distinguished by one of golf’s most beloved traditions: the champion’s leap into Poppie’s Pond, located adjacent to the 18th green. In 1988, the first champion’s leap into Poppie’s Pond was taken by Amy Alcott, and since has become one of the most anticipated and memorable traditions in golf. For more information on the ANA Inspiration, please visit www.ANAInspiration.com or call 760-834-8872. On social media, visithttps://www.facebook.com/ANAinspiration, www.twitter.com/ANAinspiration or https://instagram.com/anainspiration.