DAYTONA BEACH, Fla. — Daytona Beach is well-known for its white sand beaches, family vacations, and its reputation as the World Center of Speed, but golf is an increasingly vital part of the Central Florida oasis.

The area’s popularity as a golf destination is enhanced by the package offerings of Homewood Suites, which is perfectly-equipped to host a foursome or two taking a golf buddies’ trip. The hotel offers studio and two-bedroom suites along with a complimentary, hot breakfast buffet each morning and cocktail hours each evening from Monday through Thursday.

Packages at Homewood Suites, located directly across from Daytona International Speedway, start at $348 per person for a three-night and three-round offer. The courses available in the package include:

— The Hills Course at LPGA International was designed by Arthur Hills in 1997 and stretches out to 6,894 yards from the back tees. Hills created a layout with pine tree-lined fairways bordered by water hazards and marshland with small greens. There are five sets of men’s tees at the Hills Course along with three sets of women’s tees. It will be a challenge no matter which tees are chosen.

— DeBary Golf & Country Club has been a U.S. Open qualifying site three times and been a U.S. Senior Open qualifying site, a testament to the quality of the layout. Designed in 1990 by Lloyd Clifton, DeBary was created from land that was once an orange grove and runs through a residential community. However, on most holes, houses are hidden by a buffer of trees and vegetation. DeBary plays 6,776 yards from the back tees.

— Halifax Plantation Golf Club in nearby Ormond Beach was designed by Bill Amick in 1993. It plays through corridors of oak trees more than 100 years old intermingled with native pines. It’s a hefty 7,128 yards from the championship tees but there are four sets of men’s tees and two sets of women’s tees from which players at every handicap level can find a comfortable yardage.

Homewood Suites enjoys an ideal location – it’s just yards from ONE DAYTONA, the area’s newest retail, dining and entertainment complex – making it an ideal spot for golf groups looking to have a good time on and off the course.

Daytona Beach, Fla. — Daytona Beach is a national destination, attracting vacationers from across the country to attend NASCAR races and take a drive on the area’s famed beaches. What people are less familiar with is Daytona Beach’s rich golf history.

Golfers know the area as the home of the LPGA’s headquarters and, of course, LPGA International, a highly acclaimed 36-hole facility, but Daytona Beach has been attracting players for more than 100 years.

Here are three things you likely didn’t know about Daytona Beach’s long-standing ties to the game.

— Donald Ross, who was born in Scotland before later becoming an American citizen, is widely regarded as America’s most important golf course architect. He designed Pinehurst No. 2, Oakland Hills, East Lake Golf Club and Seminole Golf Club, among many other high profile layouts. Ross also left his mark in Volusia County, designing the South Course at Daytona Beach Golf Club and New Smyrna Golf Club. Like many Ross designs, the challenge at the South Course lies in the greens complexes. New Smyrna, which opened in 1953, is the “new” Ross course. Boasting outstanding year-round conditions, it is one of the area’s hidden gems.

— When it comes to competitive golf, Daytona Beach is, understandably, closely associated with the LPGA Tour, but did you know the area is home to golf’s longest running mini-tour event – the Riviera Open? Riviera Country Club has hosted the tournament since 1960 and future PGA Tour champions are among the event’s past champions, including 7-time Tour winner Bert Yancey, Morris Hatalsky, and Billy Hurley III.

— Spruce Creek Country Club isn’t just a quality William Amick designed golf course, it’s the centerpiece of America’s largest fly-in community. That’s right, Spruce Creek is built around what used to be a U.S. Navy landing strip during World War II. Playing the eighth and ninth holes you might have a plane just a couple hundred feet over your head, adding an adrenaline rush to your quest to make birdie.

The Great American Race and the World’s Most Famous Beach are Daytona Beach’s calling cards, but the area has plenty to offer golfers in search of a memorable of trip.

For more information, go to DaytonaBeach.golf. 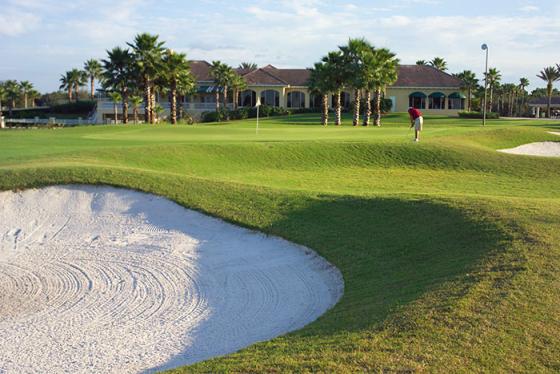 From Donald Ross to LPGA International, Daytona Beach Has Something For All Golfers

DAYTONA BEACH, Fla. — While much of the nation battled a harsh winter and a late arriving spring, Daytona Beach, one of golf’s emerging destinations, has enjoyed idyllic spring weather, providing players with pristine conditions and good times on and off the course.

Known as the home of the “Great American Race” and the ‘World’s Most Famous Beach,” savvy group leaders are increasingly discovering the virtues of a Daytona Beach golf trip. As the spring golf season enters its final month and planning for the fall begins, Daytona Beach’s popularity is surging for several reasons.

DAYTONA BEACH, Fla. — With the Daytona 500 less than two weeks away, the eyes of the sports world will be turning to Central Florida, but for golfers, the end of the Great American Race is the just the beginning of the good times.

Home to 28 courses, Daytona Beach’s spring golf season offers players a multitude of packages that are long on quality and value. With average high temperatures of 71 in February, 74 in March, 79 in April and 85 in May, Daytona Beach’s weather is as appealing as its golf offerings.

With the 2018 golf season on the immediate horizon, here are a sampling of Daytona Beach packages players are flocking to:

Best of all, Daytona Beach’s golf package combinations are nearly endless (and interchangeable). The area is also home to three courses that are part of the Historic Florida Golf Trail – New Smyrna Golf Club, The South Course at Daytona Beach Golf Club and Riviera Country Club – in addition a multitude of modern 4-star designs, such as Victoria Hills and Venetian Bay.

Whether players are looking for classic golf course architecture – New Smyrna Golf Course and Daytona Beach’s South Course are Donald Ross designs – or want a more contemporary test, Daytona Beach has something for everyone.

For more information on the Daytona Beach golf scene, go to DaytonaBeach.golf.