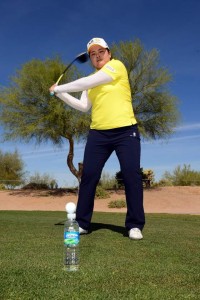 Jeju SamDaSoo to become Official Water of the LPGA

DAYTONA BEACH, Fla., MARCH 17, 2016 – The Ladies Professional Golf Association (LPGA) announced today that Jeju SamDaSoo, the leading water company in South Korea, has joined the LPGA family as an Official Marketing Partner with the designation as the Official Water of the LPGA.

“I’m proud and happy that SamDaSoo, water from clear and pure island, Jeju, South Korea, is sponsoring the LPGA Tour,” said Young Chul Kim, President of Jeju Province Development Company. “Jeju SamDaSoo is a premium water brand which is the number one water in market share, consumer preference and satisfaction in South Korea. Now, we are pleased the LPGA can enjoy Asia’s beauty and pureness of Jeju Island through SamDaSoo.”

As an official partner of the LPGA, Jeju SamDaSoo will introduce the No. 1 bottled water in Korea to the LPGA Tour. From players and caddies to the fans of the LPGA, all will have access to this great tasting water at designated LPGA events.

“It’s great for the LPGA to add yet another premium market leading brand in SamDaSoo to the roster of marketing partners,” said Sean Pyun, LPGA Managing Director International Business Affairs. “SamDaSoo is the undisputed No. 1 bottled water brand in Korea and Jeju Island, one of new 7 wonders of nature, is rapidly becoming one of the top destinations in Asia attracting over 12 million visitors annually. We look forward to working with Jeju Province Development Company to not only showcase SamDaSoo but also Jeju Island to LPGA fans around the world.”

Jeju SamDaSoo will also headline a “Refreshing Round of the Day” feature on Golf Channel which will highlight a player with a phenomenal round from that day’s telecast.

In addition to the Golf Channel features, Jeju SamDaSoo will have a presence throughout the LPGA season with digital integration on LPGA.com, consumer sampling locations and branding and product placement on-site at designated tournament events.

Jeju SamDaSoo was introduced to the LPGA by Rolex Rankings No. 2 Inbee Park.

“I’m very happy that Samdasoo became official water brand of the LPGA,” Park said. “It is pure, clean and delicious water from Jeju Island from my home country. Hopefully the partnership with LPGA will help SamDaSoo water brand expand globally just like our Tour.”

Through “Jeju SamDaSoo”, our spring water business, “Jeju Gamgyul”, our mandarin orange juice business, and housing and land development businesses, we have contributed to the improvement of local society.

Jeju SamDaSoo, especially, has stoutly maintained the number one spot in its field of business since its market introduction, and has played a pivotal role towards the “1 Trillion Era” goals of the Jeju Water industry by extending its operations into overseas markets which include the U.S., China, and Japan.

ABOUT THE LPGA
The LPGA is the world’s leading professional golf organization for women. Founded in 1950 and headquartered in Daytona Beach, Florida, the association celebrates a diverse and storied membership with more than 2,300 members representing 30 different countries. With a Vision to inspire, empower, educate and entertain by showcasing the very best of women’s golf, LPGA Tour Professionals compete across the globe, while dedicated LPGA Teaching and Club Professionals (T&CP) directly impact the game through teaching, coaching and management. The Symetra Tour consistently produces a pipeline of talent ready for the world stage. Follow the LPGA on its television home, Golf Channel, and on the web via: