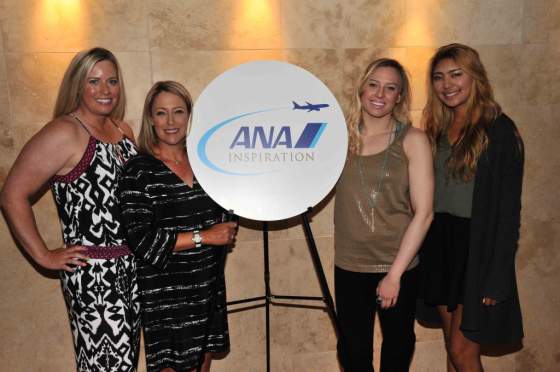 Soccer legends and LPGA stars to compete in “rematch” of

Female sporting icons Missy Franklin, Annika Sorenstam, Lindsey Vonn, Abby Wambach and Kristi Yamaguchi will headline the inaugural conference, which will include a series of panels and discussions about the state of women’s sports, female athletes as role models, using sports as a platform to inspire women of all ages, and what it takes to be a champion. Swimmer Jessica Long will also share her inspiring story of overcoming a double leg amputation at 18 months old to become the one of the most decorated Paralympians in history.

Speaking at the launch Gabe Codding, ANA Inspiration tournament director, said: “The ANA Inspiring Women in Sports Conference is an incredible platform to showcase the stories of the world’s best female athletes and learn from their successes in the Olympics and in life”. “We are so grateful to our partner ANA for sharing in the vision to help tell these inspirational stories amidst the backdrop of the LPGA’s most iconic venue. It will be an absolute thrill to welcome these sports legends to Mission Hills Country Club and watch them interact with the LPGA’s best.”

Arianna Huffington, the co-founder, president and editor-in-chief of the Huffington Post Media Group, and author of 15 books, will deliver the keynote address on the habits of successful women. Foudy will serve as host and moderator.

Wambach, a two-time Olympic gold medalist and 2015 FIFA Women’s World Cup champion, will accept the inaugural ANA Inspiration Award, which is given to a female athlete, entrepreneur or philanthropist who, through her effort and determination on or off the playing field, has inspired other women to break barriers and achieve success.

“We are proud to bring together some of the top names in women’s sports for the inaugural ANA Inspiring Women in Sports Conference,” said Hideki Kunugi, Senior Vice President of the Americas, All Nippon Airways. “One of our goals when announcing our partnership as the Official Airline of the LPGA and title sponsor of the historic ANA Inspiration was to find ways to help inspire future generations of female athletes through elements like this new conference and the expansion of the ANA Junior Inspiration. It is these opportunities that can help inspire future female sports stars in Southern California, across the United States and around the world.”

Produced by IMG, the conference will take place in the all-new ANA Hospitality Pavilion adjacent to the 18th green of the Dinah Shore Tournament Course and Poppie’s Pond. In 1988, three-time ANA Inspiration winner Amy Alcott made the first-ever champion’s leap in Poppie’s Pond, thus inspiring the LPGA’s most recognizable tradition that carries on to today.

LPGA player panelists and additional contributors for the conference will be announced in the coming weeks.

At the conclusion of the ANA Inspiring Women in Sports Conference, the first-ever ANA FootGolf Challenge will take place on the adjacent Palmer Course at Mission Hills Country Club. American soccer legends Wambach and Foudy will team up with two American LPGA players in a six-hole competition against Japanese National Team legends Ayumi Kaihori and Yayao Kobayashi and two of their Japanese compatriots from the LPGA.

FootGolf, the hybrid sport where soccer meets golf, is played with a regulation soccer ball on shortened golf holes with 21-inch diameter cups cut into the greens. The rules largely correspond with the Rules of Golf. The American FootGolf League (AFGL), which is based in Palm Springs, will oversee the setup of the ANA FootGolf Challenge course and competition.

The conference will take place in advance of the season’s first major where defending champion Brittany Lincicome will seek to become the fourth player in LPGA history to win the ANA Inspiration three times. She will be joined by Rolex No. 1 Lydia Ko, No. 2 Inbee Park, No. 3 and 2014 champion Lexi Thompson, No. 4 and 2011 champion Stacy Lewis and No. 5 Ha Na Jang, a two-time winner on Tour in 2016. The full field for the 2016 ANA Inspiration will be announced on Tuesday, March 22.

Speaking on the new initiatives for 2016 ANA Inspiration defending champion Brittany Lincicome said: “The ANA Inspiration is very special to me. Last year everything felt like it had been upgraded as ANA added lots of touches and went above and beyond for the players. But with the new additions to the tournament line-up this year looks even better. I’m really looking forward to the ANA Inspiring Women in Sports Conference. When you meet another athlete at the top of their game it gives you cold chills. I’m not sure I’ll know what to say but I can’t wait to meet such inspiring women especially when I’m returning as the defending champion. I know it’s going to be real highlight.

“The ANA Junior Inspiration is incredible. For ANA to invite leading young players from across the country to Mission Hills and be given the chance to tee it up in the first major of the year is amazing. I can’t even imagine the nerves they’ll be feeling but it really is an opportunity of a lifetime! I’ve no doubt it will inspire more young girls into the game.”

About the ANA Inspiring Women in Sports Conference Participants

Missy Franklin won five Olympic medals – including four gold medals – at the 2012 London Olympic Games where she also set the world record in the 200-meter backstroke at the age of 17. She opted to forego immediately turning professional, instead joining the women’s swim team at the University of California, Berkeley. She will head to the 2016 Rio Olympics as a professional.

Arianna Huffington is the co-founder, president, and editor-in-chief of the Huffington Post Media Group, and author of fifteen books. In May 2005, she launched The Huffington Post, a news and blog site that quickly became one of the most widely-read, linked to, and frequently-cited media brands on the Internet. In 2012, the site won a Pulitzer Prize for national reporting. She has been named to Time Magazine’s list of the world’s 100 most influential people and the Forbes Most Powerful Women list. Originally from Greece, she moved to England when she was 16 and graduated from Cambridge University with an M.A. in economics. At 21, she became president of the famed debating society, the Cambridge Union.

Jessica Long is a world-class swimmer and 12-time Paralympic gold medalist. Born with fibular memimelia, she was adopted from a Russian orphanage at 13 months old and had the lower portion of her legs amputated at 18 months old. She was active in numerous sports growing up, but began swimming competitively at age 10 and made her first international appearance at the 2004 Paralympic  Games in Athens,  Greece. In 2007, at the age of 15, she became the first Paralympian to win the AAU Sullivan Award, given to the nation’s top amateur athlete.

Annika Sorenstam is the greatest female golfer of her generation, and often regarded as the best in history. During her 15-year Hall of Fame career, she re-wrote the LPGA and LET record books, winning countless awards and changed the way golf was played, viewed and covered. She retired from the game in 2008 with 90 worldwide victories including 72 LPGA wins and 10 major championships. A member of the LPGA and World Golf Halls  of Fame, she was an eight-time Rolex LPGA Player of the Year, six-time Vare Trophy winner for lowest scoring average. She has gone on to pursue a successful business career including golf instruction, golf course design, television work and support of the ANNIKA Foundation.

Lindsey Vonn is the most successful female ski racer in the world and one of the most marketable athletes globally. She is the only American to capture downhill gold at the Olympics and the only American woman with four World Cup titles. In addition to her 2010 Olympic golf and super G bronze, she holds five World Championship medals, including double gold in 2009.

Abby Wambach is regarded as one of the greatest soccer players of all time. Known in particular for her goal-scoring ability, she is a two-time Olympic gold medalist and a member of the victorious U.S. Women’s Soccer Team at the FIFA Women’s World Cup in 2015. The 2012 FIFA World Player of the Year retired from competitive soccer last year as the all-time leader in international goals with 184.

Kristi Yamaguchi is the winner of the 1992 Winter Olympic gold medal in figure skating. After her Olympic win, Yamaguchi toured with Stars on Ice from 1992 until 2002. She was inducted into the U.S. Figure Skating Hall of Fame in 1998 and the World Figure Skating Hall of Fame in 1999. She was a Goodwill Ambassador at the 2002 Olympic Winter Games in Salt Lake City, Utah, and in 2005 she was inducted into the U.S. Olympic Hall of Fame. In 1996, Yamaguchi founded the Always Dream Foundation, a nonprofit organization that serves underprivileged, disabled and at-risk youth.

About the ANA Inspiration

The ANA Inspiration is golf’s first major and one of the LPGA Tour’s most prestigious events. Previously known as the Kraft Nabisco Championship, the tournament was founded in 1972 by David Foster and Dinah Shore and earned the designation as a major championship in 1983. Contested at Mission Hills Country Club in Rancho Mirage, Calif., since its inception, the ANA Inspiration holds the distinction of being the second oldest golf tournament continuously held at the same course. For many, the event is most distinguished by one of golf’s most beloved traditions: the champion’s leap into Poppie’s Pond, located adjacent to the 18th green. In 1988, the first champion’s leap into Poppie’s Pond was taken by Amy Alcott, and since has become one of the most anticipated and memorable traditions in golf. For more information on the ANA Inspiration, please visit www.ANAInspiration.com or call 760-834-8857. On social media, go to https://www.facebook.com/ANAinspiration, www.twitter.com/ANAinspiration or @ANAinspiration on Instagram.